The traditional sport of polo is played at speed on a large grass field up to 300 yards long by 160 yards wide, the approximate area of nine American football fields. Each polo team consists of four riders and their mounts, which can be mixed teams of both men and women.

Each position assigned to a player has certain responsibilities:

This player is the most offense-oriented position on the field. The Number One position generally covers the opposing team’s Number Four.

This player has an important role in offense, either running through and scoring themselves, or passing to the Number One and getting in behind them. Defensively, they will cover the opposing team’s Number Three, generally the other team’s best player.

This player is the tactical leader and must be a long powerful hitter to feed balls to Number Two and Number One as well as maintaining a solid defense. The best player on the team is usually the Number Three player, usually wielding the highest handicap.

This player is the primary defense player. They can move anywhere on the field, but they usually try to prevent scoring. The emphasis on defense by the Number Four allows the Number Three to attempt more offensive plays, since they know that they will be covered is they lose the ball. 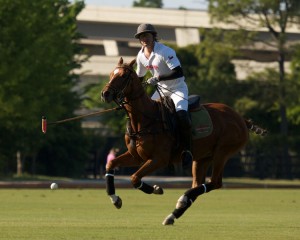 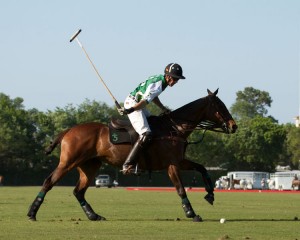 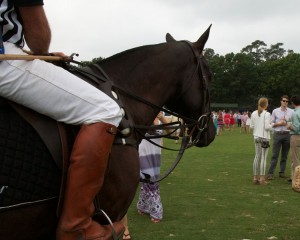 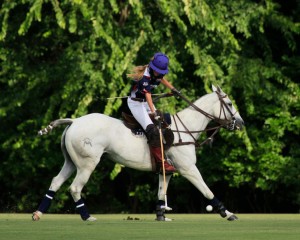 Strategic plays in polo are based on the “line of the ball”, an imaginary line created by the ball as it travels down the field. It changes each time the ball changes direction. The “line of the ball” defines rules for players to approach the ball safely, and to prevent serious injury to players and their horses. A certain amount of distance must be established to cross the line and gain access to the ball. If this is done in a dangerous way a foul will be called. A player must make a safe “ride off” or “bump” to place their horse on the correct side of the line, or they can take their mallet to the “near side” (left side of the horse). A player may only “bump” another player if both of their horses are traveling at the same speed and are shoulder to shoulder.

Polo must be played right-handed.

The game lasts approximately two hours and consists of four to six 7 minute chukkers, between or during which players change mounts. Each player will bring one horse for each chukker and one to three “spare” horses that stand on the sidelines in case a player’s horse gets tired.

At the end of each 7 minute chukker, play continues for an additional 30 seconds or until a stoppage in play, whichever comes first. There is a four minute interval between chukkers and a ten minute half-time. Play is continuous and is only stopped for penalties, broken tack (equipment) or injury to horse or player. The object is to score goals by hitting the ball between the goal posts, no matter how high in the air. If the ball goes wide of the goal, the defending team is allowed a free ‘knock-in’ from the place where the ball crossed the goal line, thus getting the ball back into play. After each goal is scored, teams change ends to account for any advantages.

During half-time of the match, spectators are invited to go onto the field to participate in a polo tradition called “divot stomping”, which has developed to not only help replace the mounds of earth (divots) that are torn up by the horses’ hooves, but to afford spectators the opportunity to walk about and socialize.

The players you wildly cheered last Sunday could be on opposing teams this week. Actually, teams are made up by how the players are rated (skill levels, called goals, run from -2 to10). When teams are being composed, the object is for them to be equally matched. A player is picked not by his or her charm, but so the sum of ratings is equal on both teams.

To understand polo even better, here is a quickie language course to help you enjoy the match or simply appear to be a know-it-all.

Ball
The entire point of the match is to wallop the ball up one way on the field and then back the other. Balls, which are about three and one half inches in diameter, weigh four and one half ounces. They are made of hard wood or plastic.

Bump
This is a defensive maneuver on the field that is quite legal and is one of the few contact moves allowed. A player attempts to ruin an opponent’s run with the ball by bumping his horse against the other player’s. This bump, which can rattle teeth, is regulated by the angle at which the aggressor attempts it. It can never be more than 45 degrees, and the faster the horses are running, the smaller the angle. It is obviously a rough one for the umpires to call, as well.

Chukker
Polo matches are divided into six periods of play called chukkers (the English call them chukkas), each lasting seven minutes. A whistle or horn sounds to end the period or game. If the score remains tied after the 6th chukker, the match continues into the seventh chukker until a score is made.

Divot
Between the third and fourth chukkers there is an old polo tradition of stomping divots. Divots are chunks of grass on the playing field which the horses have torn out. The holes can cause bad bounces of the ball and other problems during play, so at some point someone had the bright idea of getting the fans out of the stands to fix the field.

A regulation polo field is 300 yards by 160 yards. There are many kinds of grasses used, and like golf, a lot of research is going into developing special hybrids. The field is surrounded by a short wooden border called the boards. A horse and rider may go outside the boards during play, but should the ball do so, it is out of bounds and play stops.

Goal
In polo terms, this is a word with multiple meanings. Physically, it is those two posts at each end of the field the players keep trying to knock the ball through. These are set eight yards apart and will quickly collapse if struck by a horse or rider. When players do manage to knock the ball between the poles, at any height, they have scored a goal, meaning a point. A player’s skill is also rated from -2 to 10 goals, (also called a handicap), a 10 rating being both rare and outstanding. A -2 does not indicate a bad player. It says a player has reached a level good enough to be rated. The United States Polo Association assigns these ratings based on a player’s performance over a season. Finally, matches are rated by goals as well, these being the sum totals of the players involved. Thus a “high goal” match would have teams with many high rated players.

Hook
In an attempt to thwart an opposing player’s intention of hitting the ball, a player may put his mallet out to either hook the opponent’s or simply block the swing. This is legal as long as the “hooker” is on the same side of the opponent’s horse as the ball.

Line
One of the most common penalties is where one player crosses in front of the one with the ball. This is called “crossing the line”. The line is an imaginary path, running the full length of the field, in which the player with the ball is running. No player can go across this as it invites collisions and spills. When a player does cross it, an umpire blows his whistle and play is halted.

Mallet/Stick
Mallets, which really can be called sticks, are around 49 to 53 inches long, including the handle on one end and hardwood crosspiece on the other. The actual pole is usually made of bamboo. It is used as a defensive tool in hindering another player’s shot, a protest signal by sticking it up in the air after a referee’s impossible stupid call or occasionally for hitting the ball. The ball is hit with the side of the crosspiece, not the tip.

Ponies
Polo purists still get a little tic on one side of their faces when one calls polo mounts “horses”, even though that is what they are and have been for several hundred years. Formally, however, one still cheers on the polo ponies. Most are thoroughbreds and are trained extensively to play the sport. There is no height limit, but the average is 15 to 15.3 hands (a pony is 14.2 or below). Speed, stamina, and the ability to speed quickly, stop and turn are key traits. Players, even the boastful ones, say the pony is up to 80% of their ability to play well. The best ponies are usually used in the final chukker.

Positions
On the field, players play different roles. The numbers they wear show what they are supposed to be doing out there. The player with number 1 on his jersey is a forward offensive player. He usually plays downfield and is ready to take the ball toward the goal. The number 2 player is also offensive but remains in the melee and attempts to get the ball to number 1. Number 3 is the most powerful player on the team, kind of the king. He is the pivot player between offense and defense. The number four player, or the back, is the one who tries hardest to protect the team’s goal from the other team’s number 1.

Umpire
There are three referees to make everyone behave. Two, riding on the field, make most of the calls. Should they not agree with each other, they turn to the third person who is sitting on the sidelines. The third man’s decision is a Great Oz kind of ruling, and that’s that. A penalty call results in a variety of punishments, from restarting the play to open opportunities to score. This is determined by the severity of the foul. 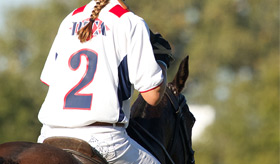